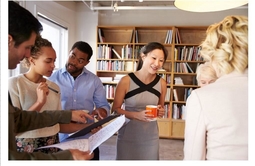 When we look at team performance, there are many elements of success.

All of these are critical to effective team performance, but none of them are as effective as they can be if the team lacks a shared vision and common values.

When people talk about vision, we typically think of it as a motto for a company that gets posted on a wall. Along with that vision can be a slew of values statements, or beliefs and behaviors they want to adhere to. The vision and values that move people in a certain direction are called a core ideology.

Defining a core ideology is critical for the success of teams of any size, not just an entire organization. A vision doesn’t have to be grand and written on every wall. It just has to be understood and acted upon. It could be a production team preparing for the day’s event, “Let’s make a positive impression in everything we do today.” They might support that vision with a value like “Let’s make ‘em smile” or “do all you can to say ‘yes’ to requests.” A manufacturing crew can focus on a shared vision of “Making things fast, safely” or “Make it like you’re buying it” with values like “Think safety before you act” or “ take care to do things right”.

It’s often said that today’s workers don’t seem to have the same work ethic as people used to. Sometimes, managers and leaders seem to be discouraged because of the attitudes of their current workers. They feel defeated and end up spending all of their time fixing problems. Conversely, I’ve seen examples of workers who move from one team to another and suddenly begin to thrive. The difference? The new leader is better at communicating a shared vision of what needs to happen and defining clear values to be used in getting there. When people feel a sense of camaraderie and belonging on the team, they want to do whatever they can to support their teammates. If that difference could make an impact, why wouldn’t you apply it consistently with your teams?

The best leaders know that within whatever level of team or workgroup you may lead, you can make a difference by creating a shared vision, then defining and supporting clear values. This is one of the most effective elements a leader can use, the real work of leadership. If you put in the time and make the effort to do so, you’ll find that you’ll spend less time on problems, and your team will perform even better.