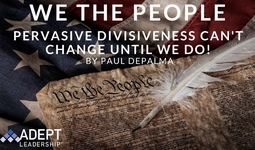 There is a great deal of blame going around for the discord that seems to be everywhere today. The media is blamed for driving a wedge between people and politicians are blamed for divisiveness. Blame has also be attributed to political extremist groups, social media algorithms, and many other causes. However, all these elements forming our culture are a cumulative outcome of what we say we want as a people, what we watch as a people, what we pay for as a people…basically who we are as a people.

If there’s anyone to blame for the divisiveness that exists in our society today, we can’t point at other factors. We need to accept that it is “we the people” who are responsible.

It’s not the media, or the politicians that need to change, it’s “we the people!”