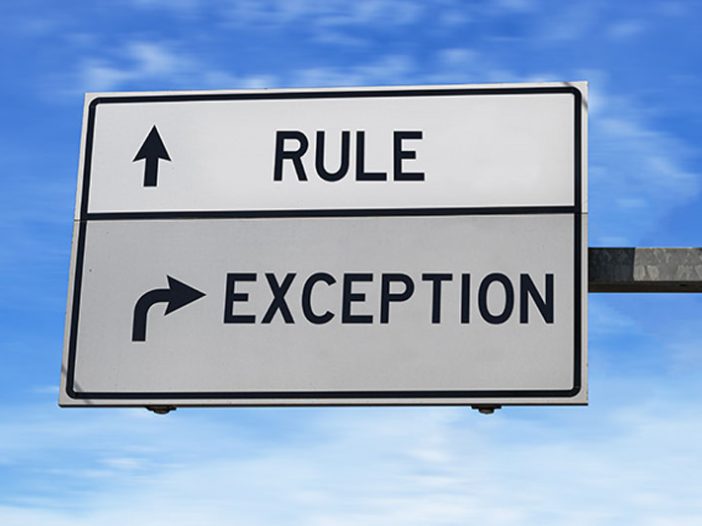 In a recent article, “How Will You Measure Your Life?” noted business professor Clayton Christensen talks about the power of committing to rules and guidelines in his life. He tells a story about missing a college championship basketball game for Oxford University because the game was played on a Sunday. He said the team and players urged him to make an exception “this one time” on the commitment he had made to himself when he was only 16 years old to never play on Sunday. He didn’t play that game and many years later he describes the power of that decision and the impact it has had on his life: “My life has been an unending stream of extenuating circumstances. Had I crossed the line that one time”, he reasons,” I would have done it over and over in the years that followed.”

Often managers lead by exception. It doesn’t start out that way but can begin to slide when they allow something to occur “just this time”. If they are not cautious, the exceptions can slowly, inevitably creep into everyday activity. Often, we see this creep of exceptions impact managers in practical ways, such as in the use and management of their time. What starts as a one-time thing: taking work home; interrupting intimate dinners with a spouse for business phone calls; answering emails at all hours; becomes the practice.

Managing By Exception Does Not Develop Leadership Skills

More significantly, this creep of exceptions can have an impact in some very disturbing ways. It can start to manifest itself in integrity about keeping commitments and honestly dealing with challenging situations or “gray” areas. This can escalate to losing clarity on legal interpretations, and either looking the other way or even involvement in breaking the law. Remember that many white-collar criminals had a spotless history before they broke the law. In an interesting revelation in his article, Mr. Christensen illustrates this point by saying that two of his 36 business school classmates are now serving time in jail.

Managing without exception means that managers are safe because they have put some non-negotiable guardrails on the fast lane to success.  Without them, it is easier to find that “just this one time” gets them heading off the road on a steep and dangerous cliff.