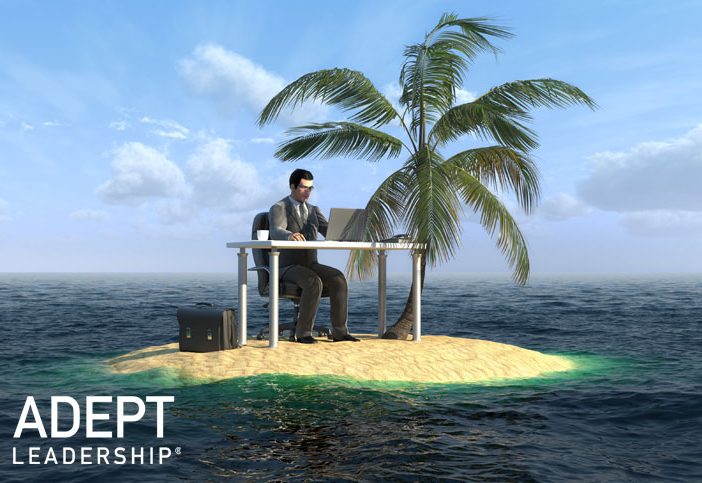 I recently had the opportunity to spend some time with one of our clients and he was discussing the concept of “stranded effort.”   I had never heard this phrase before but thought it was an interesting way to describe an organizational challenge.  We often describe lack of output despite effort as “spinning your wheels”, wasting time, or redoing work. The phrase “stranded effort” created a much different image in my mind. I pictured all these individual efforts, scattered throughout the organization, like castaways in a sea of deserted islands; all these efforts alone on their island with just sand, one palm tree and a coconut. Unable to talk with each other, working hard trying to be saved, but with little chance of survival and little chance of meaningful contribution.

I think many organizations are operating this way, with people who are not focused and are out of sync. In a recent study, a group of workers took, on average, 15 minutes to return to serious mental tasks like writing reports or computer code, after responding to incoming e-mail or instant messages. They strayed off to reply to other messages or browse news, sports, or entertainment web sites. According to Jonathan B. Spira, chief analyst at Basex, a business-research firm, the cost of interruptions to the American economy is nearly $900 billion a year (He obtained the figure by surveying office workers across the country, who reported that some 28 percent of their time was wasted dealing with multitasking-related transitions and interruptions). A world-wide survey found that two thirds of managers suffer from increased tension and one third from ill-health because of information overload.

The image of stranded effort illustrates the problem. It’s not that we don’t work hard or give it our all; it’s that we simply lack discipline and focus when we work. Many people complain about working so hard that they don’t have balance in their life. Yet when observed, they are spending a tremendous amount of time during the day on things that are not important, or not valuable toward the organization’s purpose. Their effort is stranded. If they were focused on the right things during that time, they would be productive in their work and still be able to spend time with family and friends, or on hobbies important to them. If, when at work, these same people could stay focused and in sync with organizational objectives, maybe they wouldn’t feel like castaways in their personal lives.

Leadership development that closes the gap between performance and potential, that’s ADEPT. Connect with us today.